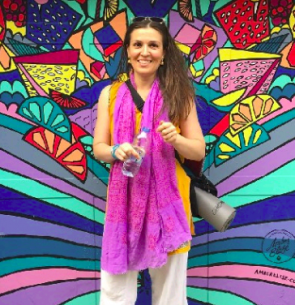 Irina trained gymnastics and acrobatics as a little girl. Later her inquisitiveness about the physical part of the human nature stepped back and gave away to her interests in the psychological makeup of the human being and the way we express our emotions and frustrations… So she became an actress after graduating from the National Academy of Theatre and Film Arts in Bulgaria.

She travelled for a few years and in 2003 (by a chance, if there is such a thing) Irina came to the UK. For a few years, she had to clean for a living, due to the immigration laws… But this led her in 2005 to her first-ever yoga class, (she did it only because she wanted to be fit and bring her confidence back again) oh well, she didn’t know what she was going into …!

Yoga not only made her healthier and happier it actually made her feel and look younger too. It accelerated her awareness on a higher (or deeper) level of experiencing life and enjoying every moment of it!!! Yoga taught her to stay positive and focused through the ups and downs of life. Since then she spontaneously started sharing her experience with friends and family who encouraged her to teach. She started classes in her local area. She has completed and qualified her training with the British Wheel of Yoga under the tuition of Tarik Dervish.

An energising, dynamic vinyasa flow yoga class, incorporating breath work for connection with mind, body and soul. This style of yoga is characterized by stringing postures together so that you move from one to another, seamlessly, using breath. In vinyasa yoga, each movement is synchronized to a breath. The breath is given primacy, acting as an anchor as you move from one pose to the next.

The variable nature of Vinyasa Yoga helps to develop a more balanced body as well as prevent repetitive motion injuries that can happen if you are always doing the same thing every day.

This class taught by a lovely Yoga teacher, Anna, will leave you buzzing happily throughout the day.